The story is identical to Kirby's Dream Land; King Dedede steals all the food in Dream Land and Kirby must stop him.

The game plays much like the Game Boy Advance Kirby games, with the player inhaling enemies and either eating them or spitting them out as a projectile. Unlike most Kirby games, the player can't gain special abilities from enemies but instead from objects the player, Kirby, can inhale and spit out to activate it's power or simply eat. The player can also float by either pressing the jump button in the air or pressing up.

Each stage finishes with a boss fight and Stage 1 and 4 have a miniboss battle.

After beating all 5 stages and defeating King Dedede, a message will pop up stating that, although Extra Game isn't unlocked yet, but you can press right on the title screen when 'New Game' is highlighted to play a mini game. Pressing right will reveal 'Extra Game' (yes) and selecting it allow you to play a minigame!

'Flappy Flapper' is a Flappy Bird game where you control a bat enemy through blocks, much like Flappy Bird's pipe manoeuvring.

The Game Jolt page has 170+ likes and 810+ followers. We're just waiting for a YouTube review of it now. 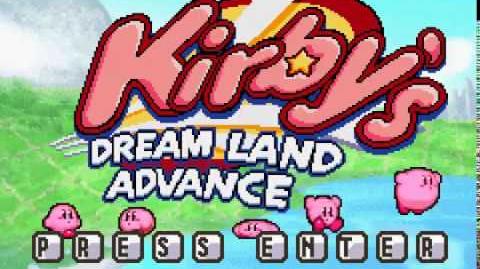 Retrieved from "https://fan-games-n-hacks.fandom.com/wiki/Kirby%27s_Dream_Land_Advance?oldid=307"
Community content is available under CC-BY-SA unless otherwise noted.