Kirby Invaders from the Dark is a fan-made game. See Fan Games

Kirby Invaders from the Dark

Kirby Invaders from the Dark is a Kirby fan game released on Windows in 2010. It is a platformer where the main character, Kirby, must defeated the "Invaders from the dark", Molotov, Pandora and Metuo.

The following is a transcript from the game's opening that appears once the game is booted up.

"It is a peaceful day on Kirby's home planet, Popstar. Kirby, however, is spending the day napping. Unfortunately, it looks like his nap is cut short. Kirby looks to the sky and sees something shocking!

Suddenly, a massive portal appeared in the sky! And out of it came two shadowy figures! Just what could they be after?

They've destroyed the Staff of Cosmos! It was the only thing standing in the way of those interdimensional invaders! It looks like Popstar's in trouble once again! Who's going to help us now?

Luckily, Kirby, being the hero he is, bravely set out to retrieve the pieces of the staff, so that he may use it to defeat the invaders and send them back to where they came from! Good Luck Kirby!!" 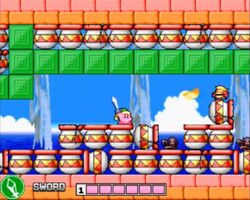 Much like most Kirby games, the player can swallow enemies by sucking with the 'X' key and gaining their abilities by pressing the Down arrow key when an enemy is swallowed. Pressing 'X' again will make Kirby spit a star out which can destroy other enemies.

He/she can move with the Left/Right arrow keys and tapping one direction in quick succession (well, tapping once then tapping again when Kirby stops moving) will make the player run. Jumping is done via the 'Z' key and repeatedly tapping 'Z' in the air will make Kirby float. After a while of floating, he will get tired and the player cannot float upwards until they touch the floor.

Unlike other Kirby games, the player cannot slide (an action typically done by ducking and pressing the jump button).

Their are 6 world in the game:

Each 'Level' contains 4 stages (this is with the exception of Level 6, which has 2 stages), a boss and a 'Haven'. Level 6 has a room which gives the player the 'Staff of Cosmos' once the final boss has been beaten. 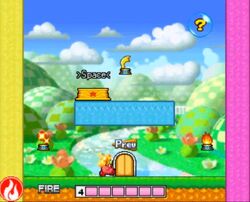 The Haven is a room where the player can save progress and get a weapon that is available. The three available weapons change between different worlds.

Once all levels are complete and the final boss has been beaten, the credits will appear (in comic sans glory). Pressing the escape key, which shuts off the game, will instead result in a message appearing, stating that there are two secret bosses hidden in Level 1 and Level 4. The secret bosses include Whispy Woods, who is found in Level 1 Stage 3, and Meta Knight, hidden in Level 4 Stage 3.

The music in this game are remixes and enhancements of other existing songs.

Not all tracks are listed and complete.

Sometimes, a music track may play at an incorrect pitch or speed. This is quite common with the "Map Select" and "The Dark Dimension Stage Select" music. The "Menu" music can very rarely play different.

In addition, the sound for Kirby inhaling may continue playing even when the player isn't performing the action.

When the player lands on the ground, he/she may be a few pixels above the ground. A bit common.

If the player is in a running state when he/she touches a warpstar, then continues to hold down the arrow key, he/she will be locked in place when the warpstar cutscene ends until the player releases the arrow key. 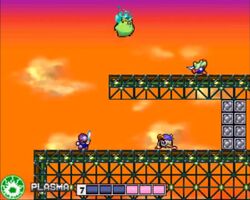 Retrieved from "https://fan-games-n-hacks.fandom.com/wiki/Kirby_Invaders_from_the_Dark?oldid=592"
Community content is available under CC-BY-SA unless otherwise noted.