Mega Man OP (going by the title "Rockman OP" for the Japanese translation) is a Mario Obsessed fan game based on the Mega Man series. The game uses FMOD and is built with the Mega Engine for Game Maker, created by WreckingPrograms.

The game's reception is very mixed, but mostly very negative. The game itself is a prime example of reusing engine assets without variety, as well as poor level, boss and visual design. In early 2019, as sequel, Mega Man OP2, was released.

The following is the story written by MO on the Mega Man Fanon Wiki. The story is not shown in-game.

"In 20XX, Mega Man had defeated Dr Wily for the final time and stood victorious. A hero to be remembered, the famous blue bomber was secretly dying and that he would be gone in a while.

5 years later: Mega Man was no more. Wily was busted out of jail by a new villain who wanted to tack over Earth and he needed the doctor's help. They started the job in the far west part of the world where, unknowingly, a robot was being rebuilt, in hope of protecting the country from threats. A robot built to save the world someday. Behold... MEGA MAN OP!"

Dr. Cadman's castle blows up after OP defeats him although he clearly escapes via an escape ship. Mega Man walks away, removing is sunglasses and remembering is past in which he headed off somewhere and shut down before being put back online.

The game has you controlling Mega Man OP. The game is a 2D sidescroller where the player can jump, shoot (up to 3 normal bullets at a time) and climb ladders. The player has to select a boss to defeat from the 8 you begin with. When all 8 bosses are down, the first set of castle stages are open. When the player beats the 4 stages, another castle is open. Once the final boss is beaten, the credits roll.

The development started during the development of the since cancelled Mega Man Universe Adventure. The game was made due to the games creator not being pleased with MMUA and development focused on the new Mega Engine by WreckingPrograms. YouTube videos detailing the games development were uploaded.

-* Reused music from the game engine.

The game got a mixed reception, usually negative. It has been met with harsh criticism, coming from it's unfitting music and lack of original enemies.

Syaxamaphone stated in the comments section of the playthrough video by Mario Obsessed: "It's definitely rough around the edges but we all have to start somewhere."

Dominic Hekashia's review stated: "The game is...technically playable. Presumably, because it was built on top of the best engine to date. But [Mario Obsessed's] approach to designing [Mario Obsessed's] game is a mess." He also criticised the game for it's flimsy plot and little custom content.

Nico, from The Retro Job, reviewed the game. On the Retro Job website it sits at 0.0 stars, with the review stating: "Not an actual game, but more of an engine showcase. It’s the Mega Man Maker engine from 2016 with some slight sprite modifications here and there. Rest of the time it’s using the five assets that came with the engine. To think I mainly evaluated an engine, is an insult of its own."

The game's planned sequel, Mega Man OP2, has been improving on most of the previous game's problems, which has been noted by others.

A sequel began development mid-way through the development of this fan game. The first BETA video for it was uploaded on the 4th of August, 2017 and the game was released in early 2019 where it too got a negative reception. However, many in the community seem to recognise an improvement, with there being a greater variety in enemies and gimmicks, along with better stages. 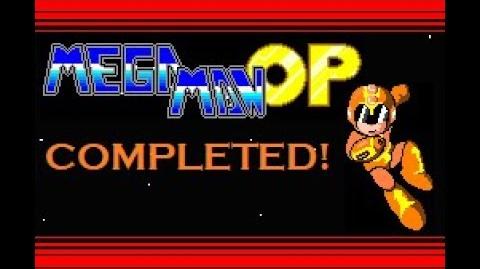 Retrieved from "https://fan-games-n-hacks.fandom.com/wiki/Mega_Man_OP?oldid=469"
Community content is available under CC-BY-SA unless otherwise noted.