Super Mario Sunshine Arcade is a hack/mod of Super Mario Sunshine, hacked by Augs with help from others and released in October of 2018. The mod is a more linear, arcade adventure where Mario must travel through levels inspired by the original game's secret levels.

The mod was very well received and has been quite popular with speedrunners. A sequel was released the following year. 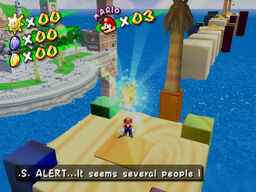 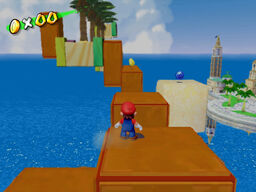 Physics and mechanics are the same as they were in Super Mario Sunshine. However, the levels aren't open world. Each stages begins with Mario having no FLUDD nozzle and must get it through the nozzle boxes placed in most levels.

Each stages has a mission of sorts. It could as simple as platforming to the end of a stage to collecting 100 coins, collecting 8 red coins, beating a boss or using Yoshi or a certain nozzle to reach the end. Each stage ends with Mario collecting a shine sprite.

Each stages also has a blue coin. Unlike the game this is modded after, they serve no purpose and are more like the player's score. These are required to beat the game 100% in speedrunning.

Whilst six of the worlds from Sunshine remain, players can't access them freely or even backtrack to previous stages. The player must travel in the level order. Each world has eight stages. In total, there are 48 stages and thus 48 shines and 48 blue coins.

There is a stage after beating the final world, in which the sunglasses-wearing Pianta will congratulate Mario and give him sunglasses.

On the 20th of October, 2019, Super Mario Sunshine Arcade 2 was released, featuring all 48 levels from the first instalment and an additional 48 new ones, touching on the worlds and environments that hadn't been used in the first hack. The sequel also features console compatibility.

Retrieved from "https://fan-games-n-hacks.fandom.com/wiki/Super_Mario_Sunshine_Arcade?oldid=432"
Community content is available under CC-BY-SA unless otherwise noted.